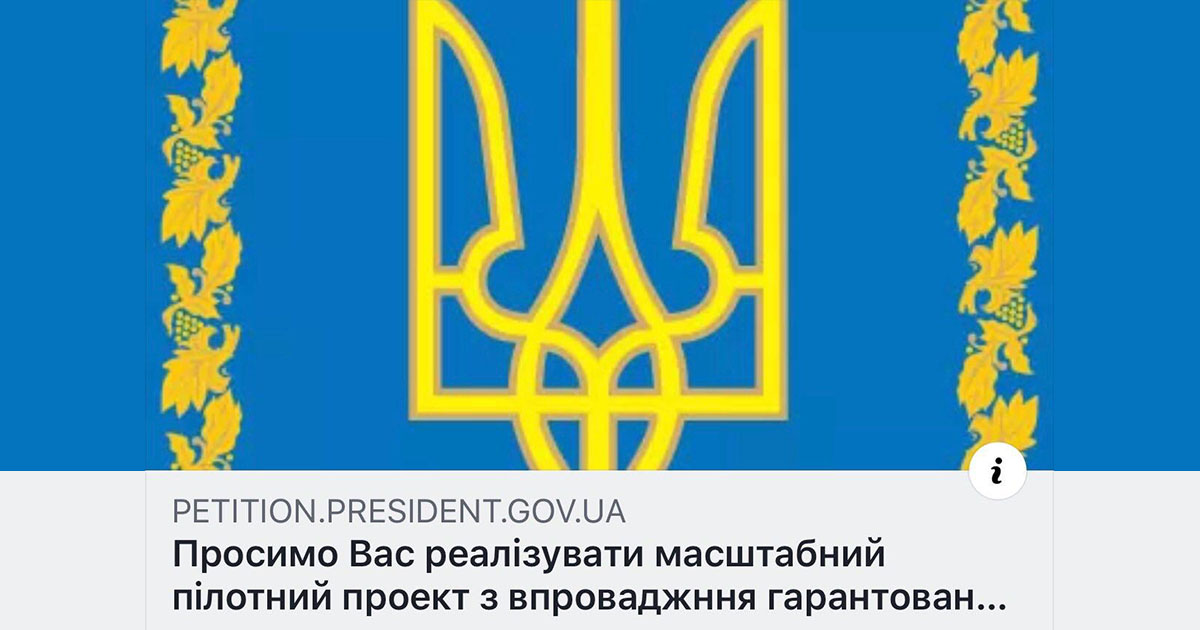 Ukraine’s course on European and Euro-Atlantic integration is unchanged. Ukraine is already part of the European family. But to become an equal family member is only possible if we meet the EU standards, first and foremost including a decent standard of living for Ukrainians. To do this, Ukraine needs a social breakthrough. It is necessary to use the latest social innovations, the latest achievements of developed countries.

Guaranteed basic income is the most effective way to ensure a decent standard of living for Ukrainians. It is actively discussed by governments and citizens in more than 80 countries around the world. Guaranteed basic income is seen as a universal tool to reduce poverty, ensure social justice, and enhance the well-being of each individual. It is common knowledge that no government today can guarantee people permanent employment, even in the medium term. The so-called “job creation” provokes corruption, the disenfranchisement of employees, and the decline in their well-being. Even in developed countries (Europe, Japan, USA), temporary contracts are concluded with workers for the period of the project, and a “new dangerous class – precariates” is formed (Guy Standing).

This is why many countries are conducting / experimenting with a smooth transition of their social security systems to new principles. These experiments have shown that a guaranteed basic income gives people opportunities for self-realization, reduces crime rates by 40%, increases confidence in the authorities. The introduction of basic income is an inevitable process, a global trend. He is supported by prominent scientists (including Nobel laureates) and successful businessmen. In many countries, prominent politicians and political parties have incorporated major income into their election or current programs (USA, Mexico, Italy, Switzerland, etc.). Guaranteed basic income is supported by: E. Musk, M. Zuckerberg, R. Branson and others. Google executives say that by 2030, almost all developed countries have implemented a guaranteed core income. The World Bank supports the introduction of basic income. The Council of Europe recommends that countries increase support for vulnerable categories of citizens and explore initiatives to introduce a guaranteed basic income.

Starting from June 25, 2019 in Ukraine, a startup project on the implementation of the guaranteed basic income (ubiua.com) began: 10 beneficiaries receive $ 50 each month without any conditions. Project term is 3 months. The source is private donations. Beneficiaries spend money at their discretion. The purpose of the project is to study the impact of basic income on the lives of Ukrainians. Preliminary results of the project: guaranteed basic income has a positive impact on physical and mental health, increases the well-being of Ukrainians, beneficiaries want a large-scale pilot project. This small social experiment is closely watched by Europe and the world.

Today the Ukrainians need a pilot project at the state level!

We ask you to implement a large-scale pilot project on the introduction of a guaranteed basic income in Ukraine for vulnerable categories of citizens (students, pensioners, disabled, unemployed, many mothers). Possible parameters of the pilot: number of participants – from 2,000 citizens of Ukraine, payments – from 200 euros per month (equivalent), term – from 12 months. Payments can be made through the state structure by cashless payment on the cards of Ukrainians. The sources of payment of the guaranteed basic income can be budgetary funds, grants, donations of Ukrainian and foreign organizations, cryptocurrency, etc. We also ask at the state level to exclude from the tax base the income of citizens from social experiments and not to deprive the state subsidies of the beneficiaries of these projects.

We propose to study: the impact of guaranteed basic income on the labor market, objective and subjective well-being, financial health, change in mental and physical health, etc. For international support we suggest to involve Ukrainian and foreign sociologists, public organizations, scientific community. For its part, the Guaranteed Basic Income Initiative Group Ukraine can provide support to the international community by attracting the BIEN World Core Income Network, the European UBI Europe Core Income Network, and the possibility of expanding the pilot by attracting international funding.

Positives of the pilot: improving the welfare of specific Ukrainians, reducing crime and corruption; increasing trust in government and public institutions; transformation of Ukraine into a socially oriented state; the first unique large-scale social experiment conducted in Ukraine for the first time in the territory of the former USSR and the first in Eastern Europe; improving the international image of Ukraine, etc.

We believe that the guaranteed basic income is the social security of the new Ukraine! Like you, we see Ukraine as a strong prosperous country. Many of us have voted for you in the hope that you will protect our interests and change our lives for the better. We want all Ukrainians to be able to exercise the right to a decent standard of living, social justice, a level playing field and democracy. We do not want poverty, social inequality and lack of opportunity to cause social upheaval in our country. Guaranteed basic income is a revolutionary solution without a bloody revolution (Guy Standing).

Guaranteed basic income is a step towards a higher league of civilized countries. Countries with 21st Century Social System. Basic income is needed for freedom, human development and democracy in the 21st century. It is an important element of a much broader goal of building a democratic society that will promote social equality and humanistic justice. We all hope that you will support this public initiative, because every citizen of Ukraine has the right to a decent life!